A person is authentic in that degree to which his (sic) being in the world is unqualifiedly in accord with the givenness of his own nature and of the world. . . . Authenticity is the term I will use to characterize both an hypothesized ultimate state of at-oneness with the cosmos and the immense continuum leading to that ultimate ideal.

As just the number of popular book titles and magazine articles that have come on the market in the last decade seems to indicate, authenticity appears to be a phenomenon whose time has come. And being who we are—allowing ourselves to be simply who we are—sounds simple enough. For as Bugental’s beguilingly simple observation suggests, authenticity is essentially a matter of coming to grips with what-is-so in one’s life at any given moment and responding “unqualifiedly in accord with” what-is-so. However simple it might sound, for most of us such authenticity is by no means simple or easy.

As Charles Tart (Waking Up, 1987) made abundantly clear, even just waking up to the what-is-so of who we really are, is no minor challenge. Moreover, Kenneth Gergen (The Saturated Self: Dilemmas of Identity in Contemporary Life, 1991), saw even 17 years ago that the challenge is highly exacerbated for the modern self, under siege as it is from a surfeit of social connectedness due to the explosion of various communication technologies. And there seems to be no abatement in the explosion.

If we were relatively simple beings, perhaps the challenge of unearthing our authentic self would not be such a formidable task. However, we are highly complex, multidimensional beings—including, in my view, a transpersonal dimension that amazingly somehow co-participates with the Divine. Moreover, we are highly suffused with immense intricacies of consciousness and unconsciousness, drenched with cultural overlays, have multiple and often conflicting desires or needs, and operate under varying levels of fears and anxieties embedded within well-established defense mechanisms. So it is no minor feat first of all to know what it is to be authentic in a given situation, and secondly, to respond in that situation unqualifiedly in accord with what-is-so. And as Sidney Jourard (Transparent Self, 1964) maintained, historically as a society we have not done very well even with what we just perceive to be so:

A choice that confronts every one of us at every moment is this: Shall we permit our fellow men [sic] to know us as we now are, or shall we seek instead to remain an enigma, an uncertain quantity, wishing to be seen as something we are not? This choice has always been available to us, but throughout history we have chosen to conceal our authentic being behind various masks. (p. iii)

In short, interest in authenticity may be increasing, but it still remains a difficult and often avoided choice. This site, then, aims to bolster the support for making the authentic choice, for research suggests that the authentic choice is the most viable one in the long run, and often, although admittedly not always, in the short run also.

True authenticity and love are inextricable. The best way one can love oneself or another is to be authentic. However, many attempts at being authentic do not appear to be very loving; indeed, to my mind, many expressions are not very loving. They are more based in egoic self-interest or posturing than in real love. Having said that, it must be acknowledged that as misguided as such attempts might be, they do manifest the what-is-so-ness of one’s stage or state of development in the given moment. So in a real sense, such attempts are congruent—i.e., authentic—expressions of where one is developmentally in the given moment.

Surrender of Egoic Will to Transpersonal or Divine Will

The hallmark of radical authenticity is the degree of surrender of the egoic will to the Transpersonal or Divine Will. First and foremost, it involves a stance, at whatever level of consciousness, in which one lives and breathes in a Larger Field harmoniously guided by the Divine Will, or Love Itself. Indeed, the desire, the surrender, and the experience is for "the Divine to live and breathe through me: In my most radically authentic functioning, I am an unfettered instrument of the Divine." On a lived-out level, it involves awaking or deep listening to, and discerning the movement or call from the very Source of one's being, and surrendering to the Source's cues. One dramatic illustration of that stance is seen in the statue Oblation on the University of the Philippines' campuses. It is inspired by the philosophy and heroic life of Philippine national hero Jose Rizal. 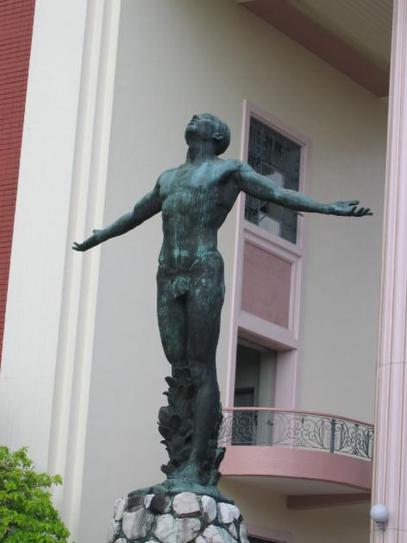 As James Bugental stated above, authenticity is a continuum; and radical authenticity is at the very farthest end of that continuum. In the perspective of radical authenticity, the farthest end represents total congruence with the Divine Source of one's being. In general, I think it’s a bit presumptuous to assume that we ever operate from that hallowed end of the continuum, much less always operate from there. Perhaps at best we only approach that end of the continuum in varying degrees and with varying frequency. Nearly all of us operate out of our egoic selves a good percentage of the time, especially so when there is any hint of egoic vulnerability. In the process of becoming increasingly authentic, therefore, a key practice is to accept and embrace one’s present level or state of psychospiritual development.

Indeed, one of the paradoxical but great dangers in the quest toward greater authenticity is a tyrannical stance toward oneself--and subsequently toward others--to be more authentic. Consequently, in the movement toward ever-greater authenticity, it behooves us to be gentle with ourselves and others: A sense of humor—being able to smile at ourselves in our given flawed state—is essential.

There is an exquisite story about the Persian poet Hafiz that Daniel Ladinsky relates in the Introduction to his volume of translations of Hafiz’s poetry, The Subject Tonight is Love (North Myrtle Beach, SC: Pumpkin House Express, 2000). Ladinsky relates,

Once a young woman asked Hafiz, "What is the sign of someone knowing God?" Hafiz remained silent for a few moments and looked deep into the young person's eyes, then said,

Ladinsky insightfully adds, “Drop the knife. Those are profound words to me, for they encapsulate and distill the essence and goal of spiritual aspirants, and anyone who has entered a recovery program.” (p. vii-viii)

Print | Sitemap
"To truly live and truly love is to flow from one's Authentic Source" - wgk Except as noted, all content copyright William G. Kueppers 1988 - 2015 All rights reserved.
Login